A Rough Rise to the Top of the Rice Heap

David Janow is chief executive of Axiom Foods, a Los Angeles start-up that entered the rice protein market when it was viewed only as an ingredient of animal feed. Now, he has cornered the $150-million market for the alternative protein as it shifts from the sports-supplement aisle toward a ubiquitous ingredient of products on nearly every grocery store shelf. 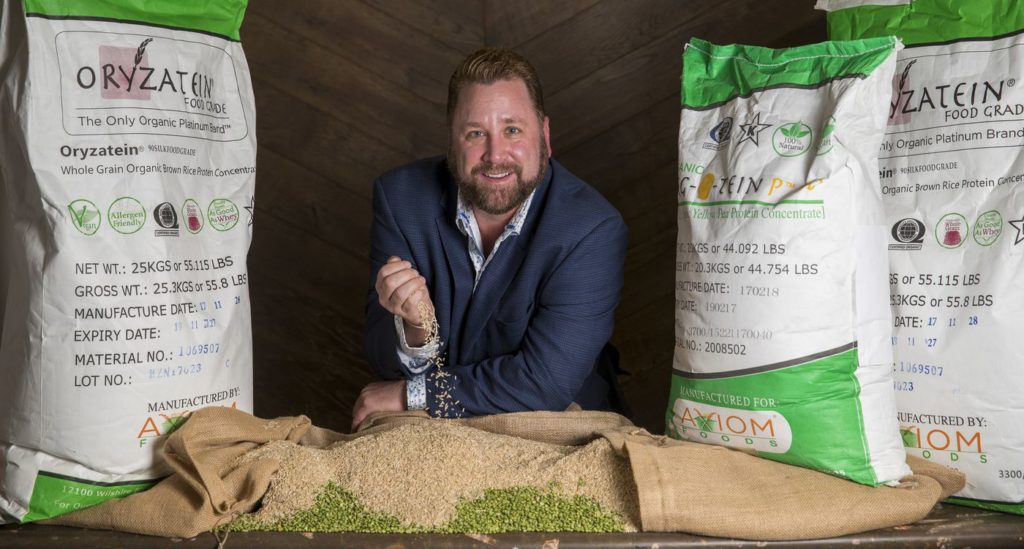 Career choices
Janow, 48, first studied psychology and biology as an undergraduate, switched to international business and finance, got an MBA, then a law degree, and landed at blue-blood law firms on Wall Street.

He knew soon enough it was the wrong address.

“Not until you become a lawyer, working for a law firm, do you really decide that you want to work for yourself,” he said. “When you’re working 90 hours a week, it’s not much fun. You make a lot of money, but you don’t have time to spend it. Then you go away for two weeks on extravagant vacations because you have so much money saved, but you dread coming back.”

From law to dog food
By 2002, Janow had ditched his legal career to work alongside his father, who ran a commodity brokering business, sourcing beverage ingredients such as ascorbic acid and caffeine. He also eyed his father-in-law’s line of work, pet food stores.

Somebody has to sell ingredients to pet food companies, he thought. So Janow cold-called two major pet food companies to ask what they needed most. Their answer may as well have been “vibranium” to him. They wanted rice protein. Lots of it.

“I had no idea what it was at the time,” Janow said. “It wasn’t even on Wikipedia.”

As it turns out, rice protein was considered little more than an industrial waste in Asia — a largely unmarketable byproduct of making monosodium glutamate.

Janow put out some feelers and soon found a supplier. “I got a hit for 35 million pounds of product — made in a shack, believe it or not, at that time. I bought at 15 cents a pound, and I sold at 55 cents,” he said.

A business idea was born, sort of.

From dogs to humans
Back then, rice protein from the MSG industry was weakly concentrated — about 55%. Janow knew just enough biology and chemistry to see an opportunity.

“I thought to myself, if it’s good for dogs and cats and animals, I assume it might be good for humans as well,” he said.

He paired up with a consultant and began experimenting with ways to make rice protein more concentrated and bring it up to human grade.

Janow and his partners came up with an all-natural process similar to making sake — fermenting the rice, then putting it through a series of separation and extraction stages to end up with “fractions,” such as starch syrup and protein. He got the protein concentration to 65%, which became an industry standard.

Except it was an industry waiting for a customer.

Talking the talk
Janow hit the road as a one-man TED talk on the wonders of rice, showing PowerPoint after PowerPoint at conferences, trying to convince the food industry that rice was the new whey, a nonallergenic alternative to the dairy derivative that some consumers can’t digest well.

He touted his enzyme-driven process to extract protein without using hexane, a neurotoxin.

Legal troubles
Just as he gained traction in 2007, pets started dying mysteriously. U.S. food authorities traced the poisonings to Chinese rice protein in pet foods — unscrupulous suppliers had learned they could game the protein quality-control tests by spiking their wares with melamine, a high-nitrogen compound used in plastics manufacture.

The ensuing recalls, impounds and testing held up most of Axiom’s human-grade protein shipments, just as it had invested heavily in expansion.

“By 2009 I was almost bankrupt,” Janow said. “You don’t realize these hurdles until you hit them.”

Millennial shift
Food trends rapidly shifted in Axiom’s favor. Consumers began to turn away from meat, adopt vegan diets and demand that the makers of their food prove they had a sustainable and low-impact supply chain free of chemicals and processes that were rapidly falling out of favor. This has come to be known as the “clean label” trend.

Makers of juices, cereals, health bars and other goods clamored for a substitute for soy protein — made from genetically modified plants — and whey.

It took six years for the Food and Drug Administration to overcome its deep skepticism of rice protein — the agency in 2015 granted a “generally recognized as safe,” or GRAS, imprimatur to it. This year, Axiom won a patent for its production process, which now can reach levels of 90% protein.

Still solo
Axiom, which got where it is without outside venture capital, isn’t interested in going public, Janow said. “We’re undervalued right now,” he said. “I’d be a penny stock at the most.”

That said, Janow believes the market is shifting rapidly in his favor; under current practices, the world simply can’t keep feeding grain to animals to get their protein.

“I’ve been offered to be bought out a few times. I still think we’re at the tip of the iceberg. To be honest, I think this can be a billion-dollar industry within five to seven years,” Janow said. “I just need to build the capacity and infrastructure for it.”

What’s next
Running a 65-employee company that controls as much as 95% of the rice protein market is not Wall Street lawyering, but it’s no picnic.

Shortly after returning from a late March business trip to China, Janow took his teen son and fiancee skiing in Park City, Utah. After that, he planned to hit the road again, trying to keep up with the demands of major consumer packaged goods companies.

“The faster you grow, the less supply you have, because they just want more,” Janow said. “They don’t want a little bit of product; they want a lot.”

Axiom hopes to meet some of that demand by building its first U.S. factory this year, in Tennessee.

Food for thought
It’s no surprise that an ingredients entrepreneur would see his career as the product of simple building blocks: “Patience and persistence, the two Ps,” Janow said.

“Don’t give up. I still today believe in it. I’m still convinced rice protein can be the next protein that will help the world,” Janow said. “I just stuck to it. Even when I was going through bankruptcy.… You get a little luck and believe in what you’re doing and the next thing you know, you’re on your way.”

Kay Abadee2020-07-21T19:03:45+00:00May 28th, 2018|Axiom in the news, Favorite Axiom in the News|
Page load link
This website or its third-party tools use cookies to process personal data.We do not sell or share your personal information, however in accordance with CCPA, you may opt out by using the link Opt out of cookies.
×
Manage consent