Is Your Product Powered by Oryzatein® Inside?

“Oryzatein® Inside” Rice Protein Standard Launching with Growing Naturals, as First to Emblazon Seal on Packaging

Since Oryzatein® was recognized as the first plant-based rice protein to equal animal-based whey protein for muscle building and repair in a clinical trial published mid-2013, an “Oryzatein® Inside” indicia is being provided to manufacturers who use the ingredient in their food products. Growing Naturals Rice Protein was the first amongst them to showcase the “Oryzatein® Inside” insignia on its packaging, which hit retail shelves in 2013. 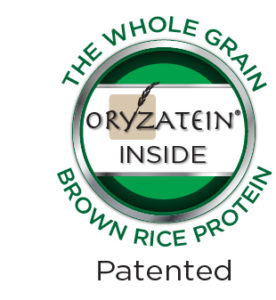 Similar to a “Good Housekeeping Seal” or “Intel Inside,” the “Oryzatein® Inside” seal provides manufacturers with a way to show consumers they feature a clinically confirmed ingredient in their product. The “Orzyatein Inside” seal provides manufacturers with added credibility and a way to differentiate their product on a retail shelf.

Oryzatein® is a 100% naturally enzyme-fractioned rice protein sourced from the most pristine rice fields in the world, sanctioned by the World Rice Alliance and is also in the process of becoming the industry monograph standard.

The creator of Oryzatein® and CEO of Axiom Foods, David Janow, has been called upon by the FDA and USDA for information on how rice is grown, sourced and fractioned. He comments, “since the rise of gluten allergies and GMO-infestation have made wheat and corn fall out of favor, rice is poised to become the world’s most important food staple. We’ve been in discussions with the nation’s largest cereal companies, such as Kellogg’s and General Mills.”

“Body builders to yoginis are begging for plant-based proteins,” says celebrity trainer, Gina Lombardi, host of Discovery Channel’s “Fit Nation” and author of Deadline Fitness. “My celebrity clients ask for it – even if they’re not vegetarians, including Kristen Bell and Sally Pressman of Lifetime TV’s Army Wives.”

Page load link
This website or its third-party tools use cookies to process personal data.We do not sell or share your personal information, however in accordance with CCPA, you may opt out by using the link Opt out of cookies.
×
Manage consent