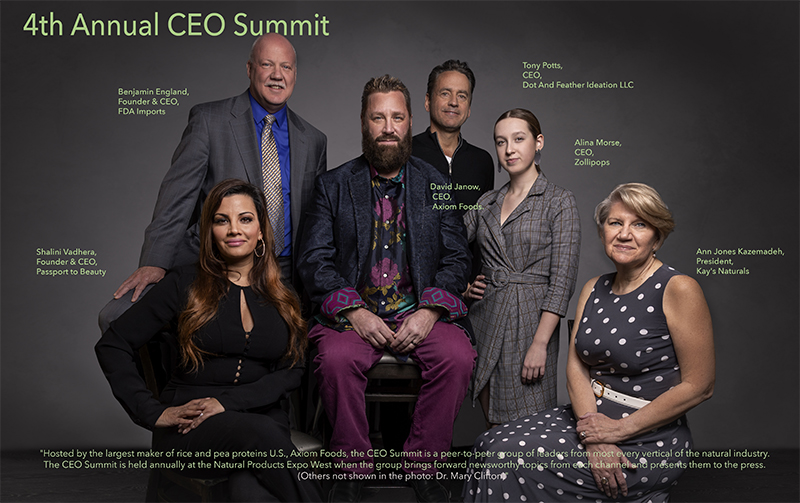 Axiom Foods hosted their fourth annual CEO Summit on March 6th, 2019. The Summit consists of a peer-to-peer group of leaders from the natural industry bringing forward newsworthy topics annually from various channels and presenting them to the media while the Natural Products Expo unfolds in Anaheim, California. This year, entrepreneur and television host from CNN and Access Hollywood, Tony Potts, moderated the discussion. Presentations were made representing the beauty, food and confections worlds. A former FDA regulator provided a behind-the-scenes download about how the USDA, FDA, FTC and other regulating bodies operate. Part of the lineup was a 13-year old teen-preneur, whose comments about the world’s #1 global epidemic children face stunned attendees. One of the more impactful presentations was given by the host of the event, Axiom Foods’ David Janow, who exposed an issue about fake organic food ingredients that are flooding into the U.S. market. Their observations on issues and trends affecting their industries were shared with the press. More info can be found at AxiomCEOSummit.com.

Created as a peer-to–peer microcosm of the natural industry, David Janow, CEO of Axiom Foods, established the CEO Summit in 2015 to provide a forum of like-minded leaders to discuss issues in their respective channels, to share viewpoints and identify new trends. Every year, Janow chooses a new group of leaders to come together as a united voice of an industry that is quickly maturing and moving toward convention.

“The natural industry is now $220B strong and growing faster than conventional products,” said Janow, whose Axiom Foods is the largest maker of rice and pea proteins in the U.S. “We are no longer a sideline industry and as such it’s important that integrity remains a paramount guiding light. We created this small forum to discuss deep and thought-provoking subjects with the press, while the excitement of product companies and buyers come together at Expo West.”

David Janow began the dialogue by saying that the organic industry is in a state of crisis. “Consumers are willing to spend more money on organic products but are being duped as some of the ingredients inside those foods have been falsely certified organic.” He added: “Something is wrong in our industry. Certifiers are not doing their job and companies are not testing for GMOs and pesticides. Large companies like Kraft and Kellogg’s, however, are more diligent because they require FDA GRAS before buying any ingredient.”

Benjamin England, CEO of FDA Imports and a 17-year regulatory veteran of the U.S. Food and Drug Administration expressed the government’s viewpoint about natural and organic claims. “Their goal is to find fraud; don’t look to the government to be your hero.” England also went to state where agencies get the most information and shocked the audience by saying its often “tips from consumers and former employees.” England also noted the newest labeling term trend: “clean,” saying that it’s nebulous and needs further clarification.

Ann Jones Kazemezadeh of Kay’s Naturals commented on old food problems that are being dressed up in new natural industry verbiage. She explained that sugars and fats are still there, but just being moved around and rolled into creative serving sizes and marketing language. “High protein is a consumer hot button, so products like Cheerios is calling out ‘11 grams of protein with milk’ in their marketing, but eight of those grams are in the milk. The natural industry was conceived to ‘do no harm.’ If Oreos makes an organic cookie, is it really doing anyone good? Obesity costs $150 billion dollars a year and causes 300,000 premature deaths.”

The Summit’s youngest entrepreneur is on a mission to wrestle down the biggest epidemic amongst kids according to the U.S. Surgeon General: tooth decay. Dismayed by the fact that something so prevalent is 100% preventable, she created the #1 selling, sugar-free lollipop line. Zollipops’ 13-year-old teen-preneur, Alina Morse, charmed the audience after saying: “I’ve been in the business for half of my life.” She eloquently described how acid and sugar is lavishly used for the sake of extending the shelf life of food. “And, the food industry keeps using it because it’s cheap.” Morse’s nonprofit, One Million Smiles in schools nationwide, is educating the next generation on the importance of oral health.

“Beauty ingredient laws in the U.S. have not changed since 1925,” stated CEO of Passport To Beauty, Shalini Vadhera. “The E.U. has much more strict regulations on beauty products. Because of the lack of cosmetic industry regulations in the U.S., counterfeiting is a huge problem.” She gave a case study noting: “Kylie Jenner’s lip kit was a counterfeit product from China that contained glue.” Vadhera also provided a statistic about Spain being named the #1 healthiest country in the world and the U.S. fell to #37.

Joining the conference via satellite from St. Lucia, Dr. Mary Clifton, a cannabis expert, discussed the massive changes regarding this and CBD products: “The social stigma of CBD and cannabis is reducing dramatically and there is real value in what the natural food industry is doing to create edibles.” She noted that education is very important as the CBD and cannabis industry explodes. “Studies show that dispensary workers have about an hour of education before getting behind the cash register. That’s business training, not the pharmaceutically trained information they really need to impart to their customers.”

About the CEO Summit (#CEOSUMMITBYAXIOM): The CEO Summit, held annually during Natural Products Expo West, is a peer-to-peer group where natural industry leaders discuss hot topics and share them with the press. As the $220B natural sector moves towards the mainstream, founder David Janow, forged the CEO Summit as a way to inspire fellow leaders to remain vigilant about its integrity and original founding principles of “do no harm.”

About Axiom Foods: We are on the cutting edge of plants and protein. We’re involved in clinical trials, plant fractioning technology, and education including sponsoring Plant Protein Month each April. We are affecting change in the global food supply by bringing compassion to the food business and showing the world that animals are not necessary to build muscle. We’re at the forefront of rice becoming the new wheat – and the new meat. Just ask CNBC.

support@pcworkcomputers.com2020-07-21T19:03:45+00:00March 6th, 2019|Favorite Press Releases, Press Release|
Page load link
This website or its third-party tools use cookies to process personal data.We do not sell or share your personal information, however in accordance with CCPA, you may opt out by using the link Opt out of cookies.
×
Manage consent