The Truth about Glyphosate and Pea Protein 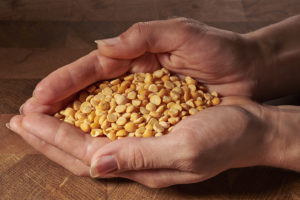 Glyphosate is the main active ingredient in a popular herbicide or weed killer called Roundup. It is also the latest boogie man to haunt pea protein powders thanks to concerned mother and “food activist,” Mamavation.  In May 2019, she partnered with The Detox Project and released a video “exposing” the glyphosate levels found in 8 top selling organic and conventional pea protein brands sold on Amazon.

Unfortunately, many essential facts were either left out or misrepresented in the video, making it an understandably frightening thing for consumers to hear, and equally frustrating thing for makers of pea protein supplements and even pea farmers. Here are 9 truths you should know about organic agriculture, toxicology, glyphosate and pea protein:

1. Organic does not mean pesticide-free

Organically grown crops and livestock are not exempt from all herbicide and pesticide use, as many consumers incorrectly assume. They are however, limited in the types and amounts that can be used. The USDA’s National List of Allowed and Prohibited Substances contains all the synthetic, non-synthetic and non-organic substances which can (or cannot) be applied to organic crops and livestock.  While there can generally be fewer pesticides on organic vs conventional foods, they are not 100% free from pesticides.

2. (Direct use of) glyphosate is prohibited in organic foods

As the video correctly states, “glyphosate is prohibited in organic standards.” More specifically, however, it is an herbicide that is prohibited to be directly applied on organic crops.  What they fail to mention is that there can be indirect, inadvertent contact of glyphosate from drifts of neighboring conventional farms, or shared handling facilities.  And because this is something that organic farmers cannot 100% control or avoid, it is entirely possible, safe and legal for organic foods/crops to contain very trace and limited amounts of glyphosate. (More on the limit for organic peas on #5 below).

3. Toxicity is determined by dose; not just exposure

In other words, just because we are exposed to something doesn’t mean it will automatically be toxic to us.  The dose of the exposure is what determines toxicity, even for seemingly “non-toxic” things.

For example, a single beer is generally non-toxic to an adult, but 10 or more beers may indeed lead to alcohol intoxication. The seeds or pits in various fruit like apples, peaches, cherries, all contain something called amygdalin, which when digested turns into cyanide, a dangerous poison. But even if all the seeds in a single apple were “accidentally” consumed, that still wouldn’t produce enough cyanide to make a person even slightly sick. The dish soap residue we consume by using recently washed dishes is completely harmless—but drink directly from a bottle of dish soap and there might definitely be harm.  Even essential vitamins can be toxic at extremely high doses.

Toxicologists are experts who through years of rigorous testing and research determine the specific level of exposure, (the dose) needed for a substance to be considered toxic.  In the same manner, they have determined the levels of safety and toxicity for glyphosate. Thus, simply testing “positive” for extremely trace amounts of glyphosate on organic or conventional foods does not automatically make them toxic.

5. The “level of concern” for organic pea protein is actually >400 ppb glyphosate (not >9ppb).

The USDA and National Organic Program (NOP) state that in order to be labeled and sold as Organic, the agricultural product must contain no more than 5% of the EPA’s limit “for the specific residue detected or unavoidable residual environmental contamination.”  The EPA’s residual tolerance (or limit) of glyphosate on dried field peas (the kind used to make pea protein) is 8 ppm (equivalent to 8000 ppb), and 5% of that per NOP standards is 0.4ppm (or 400ppb). So the true concern here is that if pea protein tests above 400ppb, it is simply prohibited from being labeled or sold as organic.

The concern has nothing to do with safety of consumption unlike what the video leads consumers to believe. (More on safe levels on #6 below). It suggests that organic pea protein products testing above 9ppb have at least a “slight concern” and anything above 80 ppb are of “high concern.” To put things bluntly, the two members of The Detox Project along with Mamavation decided that any and all organic pea protein and other products should contain virtually zero glyphosate, despite what teams of hundreds of experts in these fields have determined based on the reality of inevitable contamination.

In reality, ALL 8 products (organic or not) tested in the video were well below the 400ppb organic limit, (despite not all being pure pea protein), and are thus not in any violation of organic standards.

6. The limit for glyphosate residues on field peas is 8ppm

Whether conventional or organic, the reality is that trace amounts of pesticides or residues may remain on crops after they are harvested. This is also why washing produce before consumption is always recommended. Nonetheless, the EPA sets specific tolerances (or limits) on the level of residue that can remain from each individual pesticide on hundreds of individual crops.  For example, the residual glyphosate limit for carrots is 5ppm (5000ppb). For almonds it is 25ppm (or 25,000ppb).  For dried field peas, the kind used to make pea protein, the residual glyphosate limit is 8ppm (or 8000ppb). The FDA’s job is to enforce these limits and ensure that residues on domestic or imported foods do not exceed the limits set by the EPA. How and why these tolerances are set leads to #7 below.

It is not simply the decision made by three concerned food activists.  The EPA sets tolerances (limits) to ensure the safety of the food supply before even allowing the use of a pesticide on food crops. Tolerances are set at levels that provide “a reasonable certainty of no harm.”  Actual residues are unlikely to exceed the level when a pesticide is applied according to its label directions.  (This was evident when the levels that the Detox project found were applied to the true organic tolerances).

Here’s a summary and direct quote of what the EPA takes into consideration before setting a tolerance:

We perform dietary risk assessments to ensure that all tolerances established for each pesticide are safe. These assessments account for the fact that the diets of infants and children may be quite different from those of adults and that they consume more food for their size than adults. We address these differences by combining survey information on food consumption by infants and children with data on pesticide residues to estimate their exposure from food. We also estimate exposure of other age groups such as women of reproductive age, ethnic groups and regional populations.

We then combine information about pesticide exposure (from food, drinking water and residential uses) to infants, children and other subgroups with information about toxicity to determine potential risks posed by pesticide residues. If risks are unacceptable, we won’t approve the tolerances.

The FDA, USDA, and multiple state enforcement agencies are all involved in enforcing the EPA’s pesticide tolerances in food.

8. Per WHO, the ADI (acceptable daily intake) for glyphosate is 1mg per kg of bodyweight

Think of the ADI as a very conservative, safe level of consumption established for the inevitable exposure of glyphosate via residues in food or drink.  The WHO/FAO determines the ADI “on the basis of a complete review of the available information, including data on the biochemical, metabolic, pharmacological, and toxicological properties of the pesticide derived from studies of experimental animals and observations in humans.” It sets the ADI a minimum of 100 times lower than any dose that showed any kind of toxicity in any of the hundreds of different studies analyzed.

For a 150lb adult, this equates to roughly 68 milligrams of glyphosate per day.

To put things into perspective, even a large 40 gram serving of pure pea protein testing at the maximum 400ppb organic limit, would still only yield a 16mg dose of glyphosate. It would take this 150lb adult over 4 servings of this size per day to reach the ADI for glyphosate, and even then there would still be no toxic effects.

9. Major global regulatory and research agencies agree that glyphosate does not pose a carcinogenic risk to humans

Over 12 different agencies across the world including the World Health Organization, the European Food Safety Authority (EFSA) in Europe, the Food Safety Commission in Japan have determined through rigorous analyses of data that glyphosate is not carcinogenic to humans.  A summary of each agencies’ determination can be seen here.

Of note, the WHO in conjunction with the Food and Agriculture Organization (FAO) of the UN specify that glyphosate is unlikely carcinogenic and unlikely genotoxic to humans via exposure through the diet. The only positive association was given by the International Agency for Research on Cancer (IARC) for non-Hodgkins lyphoma specifically from agricultural exposure, not dietary exposure. The IARC goes on to mention that glyphosate is in its hazard category “Group 2A: probably carcinogenic to humans” along with red meat, hot beverages and working as a barber.

Any substance, from water to glyphosate can either be toxic or non-toxic. The determining factor is the dose.  While the concerned efforts of Mamavation and the Detox Project are appreciated, it is important to review and make food decisions based on evidenced based facts rather than chemophobic opinions alone. If you are a consumer of pea protein, especially one made with VegOtein™ chances are it is perfectly safe.

Axiom Foods is the manufacturer of multiple plant-based ingredients including VegOtein™ pea protein.  Axiom is committed to producing high quality ingredients and ensures that each lot of VegOtein (Organic or conventional) is consistently and thoroughly third-party tested through accredited labs for things like microbes, contaminants and herbicides like glyphosate. To date, glyphosate results have been either undetected or consistently and markedly lower than what is required by USDA Organic and EPA Standards.