Skip to content
Previous Next
CNBC: Want Muscles? Rice Is the New Meat

Darin Goka personifies everything about modern fitness. He does CrossFit. In fact, he loves CrossFit so much, he competes in a league.

He’s up to date on diet trends. Paleo was nice for a while, but he’s kicked it up a notch to vegan. “No animals were harmed in my training,” he boasts.

So how does this muscle-bound, fat-free specimen of modern manhood get enough protein?

“I feel better,” Goka said one afternoon while lifting barbells, jumping rope, and reaching for rings at Valley CrossFit in Los Angeles.

Americans have been on a protein-adding craze, throwing powder into smoothies, sprinkling it on foods. General Mills even added protein to Cheerios. One report suggests the whey protein market could hit $12 billion globally by 2017. Soy protein adds a few billion more. 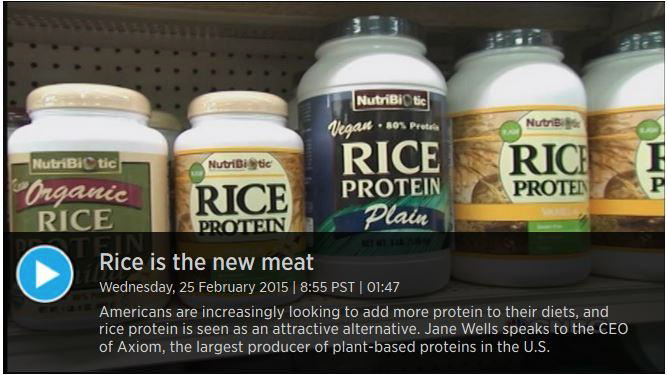 However, not everyone wants to get their protein from animals, and some have problems with soy. Leeching protein from sources like wheat or peanuts doesn’t help those who can’t tolerate gluten or
have nut allergies.

“A long time ago, I realized there was a need for a plant-based protein,” said David Janow, CEO of Axiom Foods, the largest producer of plant based proteins in the country. He chose to focus on rice because he thought it would be a great source for boosting protein in animal feed. However, in 2005, “I realized there was a need in human nutrition. Axiom now produces Oryzatein Brown RiceProtein Powder, which it sells under its own Growing Naturals line. It’s also sold in products made by manufacturers like Garden of Life and NutriBiotic.

Janow estimates 2014 sales of $100 million will double this year. One big reason is that the market is moving beyond just customers with nutritional concerns to fitness enthusiasts.

A study published in the Nutrition Journal found that exercise subjects who worked out using whey protein and rice protein had the same performance and recovery. “I feel that it’s easier on my stomach,” said Goka.

Most people think of rice as a carbohydrate, but about eight percent of each grain is made up of protein. Axiom uses a fermentation method to extract and concentrate the protein, and the rest of the grain is used for things like rice syrup. The husks are burned to create power. “Every part of the grain of rice is used,” Janow said.

Products containing Axiom’s Oryzatein are sold in Whole Foods, Sprouts, and small health stores like The Vitamin Barn in Malibu, where it appears in powders sold by NutriBiotic.

Rice is the new meat

Americans are increasingly looking to add more protein to their diets, and rice protein is seen as an attractive alternative. Jane Wells speaks to the CEO of Axiom, the largest producer of plant-based proteins in the U.S. 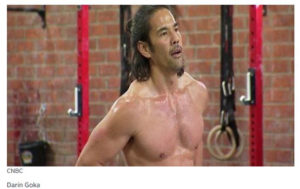 “In the last five-plus years we’ve really seen the rice protein just take off in sales as more people become aware of how great the product is,” said Kenny Ridgeway, NutriBiotic’s director of Purchasing and Manufacturing. “The organic sales since 2011 have increased 204 percent, and actually last year the sales increased 72 percent.”

Axiom also sells hemp and pea protein, but rice has the greatest promise. “Rice is very high in leucine, which builds muscle,” Janow said. As for cost, Janow claims rice protein is less expensive to manufacture than whey powder.

How does it taste? Watch the video.

marketing@axiomfoods.com2020-07-21T19:03:45+00:00May 28th, 2018|Axiom in the news, Favorite Axiom in the News|
Page load link
This website or its third-party tools use cookies to process personal data.We do not sell or share your personal information, however in accordance with CCPA, you may opt out by using the link Opt out of cookies.
×
Manage consent