Skip to content
Previous Next
Are New Meatless Burgers Really Healthy or Not? 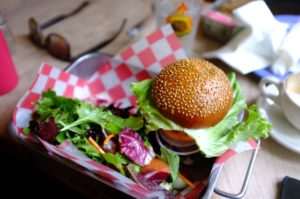 Given the rising interest in plant-based, meatless burgers such as the Impossible- and Beyond Burger, there’s been a lot of discussion on the internet surrounding the health status of the newly popular veggies patties.  Are plant-based burgers really better for you than regular hamburgers, or is their reputation purely the result of a health halo? Let’s take a look at some of the pros and cons of plant-based burgers.

1. They fit vegan, vegetarian and even flexitarian diets

One obvious benefit of meatless burgers is that they are available to the millions of vegans and vegetarians in the US alone who don’t eat meat. According to faunalytics.org, a 2017 poll sampling 11,000 adults in the US, revealed that just 2% of Americans are vegetarian and only half of one percent or 1.62 million are vegan.

Until recently, food options were limited for vegetarians and even more so for vegans. The increasing availability of meatless burgers (that aren’t just mashed up veggies) add some much-welcomed diversity to the diets and palates of vegans and vegetarians.  They also offer up an eco-friendlier burger for those flexitarians looking to reduce their red meat intake without sacrificing flavor, texture and protein content.

The red meat debate is ongoing—is it good or bad for your health? While many factors are at hand to determine its risk to consumers’ health, one thing researchers seems to agree on is its generally detrimental impact on the environment.  The elaborate process of meat production from agriculture to animal farming exhausts enormous amounts of natural resources all while producing equally enormous amounts of gas emissions, waste and pollution.  According to the EPA, greenhouse gas emissions from the agriculture sector (which includes livestock) accounted for 9% of total US gas emissions, having increased by 8.8% from 1990.  The major driver for that increase is primarily attributed to the increase in meat production.

While the EPA has suggestions for the agricultural sector to reduce greenhouse emissions, one way for individuals to contribute is to reduce their consumption of red meat. Impossible and Beyond burgers make it easy for omnivores and flexitarians to do so by offering a plant-based burger that is comparable in taste and texture to a regular beef burger.

Whole plant foods are incredibly beneficial to health and loaded with nutrients including unique phytochemicals and fiber that animal products lack. However, because of this most don’t provide much in the protein department. While it is entirely possible for vegans and vegetarians to get their daily fill of protein from whole plant foods, it may not be easy or convenient for all, especially if dietary restrictions and/or food allergies are present. Soy is both a rich source of plant protein, but also a major allergen.

These meatless burgers are uniquely made with protein from split peas, a food with low allergenicity, and they offer substantial protein (19-20 grams) in the form of a savory 4oz burger rather than your typical, drinkable plant protein shake.

If you’re a flexitarian, it means you wont be compromising the protein you could be getting from a hamburger.

Cholesterol itself isn’t a bad thing.  In fact, cholesterol is essential for normal body functioning, however, it is not an essential nutrient. In other words, you don’t need to get any from food because your liver can naturally make all the cholesterol you need.  So, any cholesterol obtained from beef or other animal-based foods is excess amounts that your body needs to figure out how to recycle or get rid of.

When the body is overloaded with cholesterol from food, it may eventually lag or have trouble excreting the excess. And having too much of the “bad” LDL cholesterol in your body is when problems arise.  Overtime, excess LDL cholesterol can lead to things like hardening of the arteries, stroke or heart disease.

Plant-based foods don’t contain any cholesterol, so in this sense meatless burgers are a heart healthier choice compared to ground beef burgers.

5. They provide a little bit of fiber

1. They can be highly processed

Before the Impossible and Beyond burgers came around, many older-generation meatless burgers, or “veggie patties” were made either from TVP (textured vegetable protein aka soy) or by mashing up a combination of beans, whole grains, seeds, nuts, and even some vegetables.  And while these patties offered much nutrition, their generally mushy texture left much to be desired on the palate especially for flexitarians who are familiar with beef texture.

In an ideal world, the newer meatless burgers wouldn’t be so processed, but the reality is that processing is necessary in order to accomplish the “impossible”—matching the taste and texture of a real burger.  That being said, Beyond/Impossible Burgers shouldn’t be a staple of any plant-based diet, they should be considered a sporadic indulgence just like any other burger or processed food.

If you’re looking for less processed meatless burgers and texture isn’t an issue, stick to patties made from a combination of whole plant foods as mentioned above.

2. They can be high in sodium

Sodium often (but not always) goes hand in hand with processed foods, as it can be used as a flavor enhancer and/or a preservative helping to offset bacterial growth.  However, this isn’t really the case when it comes to meatless burgers, especially those made with pea protein. In other words, manufacturers aren’t freely adding salt in just to make it taste good.  Instead, much of the sodium content results from using sodium as a pH-adjusting processing aid during the process of turning dried split peas into pea protein powder.

As such, pea protein-based burgers have sodium levels that are similar or only slightly lower than their beefy counterparts.  If sodium is a concern, stick to whole-plant food patties instead or limit your consumption of meatless burgers just as you would regular burgers.

3. They contain coconut oil and are thus high in saturated fat

To many, it is a surprise to see a “high” saturated fat content on a food that is plant-based, considering very few plant-based foods contain any saturated fat.  The main culprit in both Beyond and Impossible burgers is refined coconut oil.  What many don’t realize however, is that coconut oil is added more for functional than nutritional purposes—to help mimic the marbling look of regular ground beef and to help enhance the moisture/juiciness of the burgers.

Beyond and Impossible burgers contain approximately 6-8g saturated fat per 4oz patty versus a regular ground beef patty which contains 10g saturated fat per 4oz on average.  And while coconut oil is indeed high in saturated fat, a key point of differentiation from the saturated fats found in beef (and dairy) is the length of the fatty acid molecule.  Beef and dairy contain mostly long-chain fatty acids (FAs), while coconut oil contains just a few long-chain FAs with mostly medium-chain fatty acids, also known as medium-chain triglycerides (MCTs). The body processes MCTs slightly different than it does long-chain FAs, using them primarily as sources of energy rather than fat stores.

Given its MCT content and plant-based origin there is a plethora of evidence-based benefits to coconut oil, however the verdict is still up as to whether it is truly heart healthy or not.  A few studies have shown that coconut oil does help to raise the “good” HDL cholesterol, but yet others have shown it may also raise the “bad” LDL cholesterol because of the small percentage of long-chain fat molecules in coconut oil. At worst, the effect on heart health is neutral so eating occasional meatless burgers will not be worse than eating a beef burger due to its coconut oil content.

If you’re looking to increase your veggie intake, eating an Impossible or Beyond burger isn’t the best way to do it.  In fact, the new meatless burgers were intentionally made to provide a rich source of plant-based protein—that which most veggie patties of the past vastly lacked.  Stick to whole food veggie patties if you are looking for unique ways to increase your veggie intake.

Impossible and Beyond pea protein burgers do have some good qualities and some not-so-good qualities much like any other food.  They are sustainable source of plant protein and can help some people reduce their red meat intake while still getting a “meaty”, protein-rich experience.

What’s exciting is that this is just the beginning of what we will be seeing as plant-based meat, chicken and seafood evolves. For being an industry in its infancy, it’s already come a long way from the original $300,000 test burger. Through food innovation and consumer demand, we can expect sooner than later that the ingredient lists will get shorter and the health benefits will increase.

Ultimately, meatless burgers aren’t meant to be diet staples for flexitarians or even vegans/vegetarians. They should be enjoyed in moderation, much like a regular hamburger should be. And if you are looking for a “healthy” veggie burger, stick to those made with whole foods (so long as you are willing to cope with a generally mushy texture).